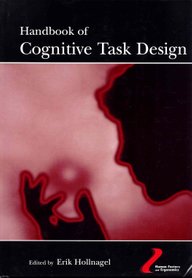 What Is Cognitive Task Design?

In a Handbook of Cognitive Task Design (CTD) it is reasonable to begin by defining what CTD is. To do so it is useful first to make clear what it is not! CTD is not a new scientific discipline or academic field, neither is it a unique methodology.

CTD Is Not A New Scientific Or Academic Field
Since the mid 1970s, the terms cognitive and cognition have come to be used in so many different ways, that they have nearly lost their meaning. There has in particular been an abundance of more or less formal proposals for lines of activity or directions of study that as a common feature have included the terms cognitive and cognition in one way or another. These range from cognitive ergonomics, cognitive systems engineering, and cognitive work analysis to cognitive tools, cognitive task analysis, cognitive function analysis, cognitive technologies, cognitive agents, and cognitive reliability – to mention just a few.
Some of these have thrived and by their survival justified their coming into the world as well as established an apparent consensus about what cognitive means. Others have been less successful and have in some cases languished uneasily between survival and demise for years. The situation does not in any way seem to improve, since the terms cognitive and cognition are used with ever increasing frequency and, inevitably, diminishing precision – although at times with considerably success in obtaining funding.
Cognitive Task Design is not put forward in the hope that it will become a new scientific field. Indeed, was that to be the case it would signify failure rather than success. As this Handbook hopefully will make clear, CTD is something that we already do – or should be doing – although we may bee lacking a precise name for it.

CTD Is Not A Unique Methodology
The widespread use of the terms cognitive and cognition is, of course, not the result of a whim but does indicate that there is an actual problem. Indeed, many people are genuinely concerned about such issues as, for instance, cognitive tasks and cognitive reliability, since these are salient aspects of human behaviour in situations of work, as well as of human behaviour in general.
It is because of such concerns that a number of specific methodologies have emerged over the years. A case in point is the development of cognitive task analysis as an “extension of traditional task analysis techniques to yield information about the knowledge, thought processes, and goal structures that underlie observable task performance” (Chipman et al., 2000, p. 3). Even though cognitive task analysis is used as a common name for a body of methods that may vary considerably in their aim and scope – partly due to the imprecision of the term cognitive – they do represent a common thrust and as such a distinct methodology.
Whereas cognitive task analysis is aimed at analysing cognitive tasks, i.e., “knowledge, thought processes, and goal structures”, Cognitive Task Design is not aimed at designing cognitive tasks as such, at least not in the precise sense implied by Chipman et al. Instead of being a unique design methodology, CTD is proposed as a unified perspective or point of view that can be combined with a number of different methods. This is explained in the next section.

CTD Is A Unified Perspective On Design
By saying that CTD is a perspective I mean that it designates a specific way of looking at or thinking about design. More particularly, it is a specific way of thinking about the design of systems where humans and technology collaborate to achieve a common goal. These systems are called joint cognitive systems, a concept that will be explained later in this prolegomenon. The way of thinking that is represented by CTD can be expressed by a number of principles:
Every artefact that we design and build has consequences for how it is used. This goes for technological artefacts (gadgets, devices, machines, interfaces, complex processes) as well as social artefacts (rules, rituals, procedures, social structures and organisations).
The consequences for use can be seen both in the direct and concrete (physical) interaction with the artefact (predominantly manual work) as well as in how the use or interaction with the artefact is planned and organised (predominantly cognitive work). Thus, introducing a new “tool” not only affects how work is done, but also how it is conceived of and organised. This will in most cases have consequences for other parts of work, and may lead to unforeseen changes with either manifest or latent effects.
The primary target of design is often the direct interaction with or use of the artefact - as in Human-Computer Interaction and Human-Machine Interaction. Interface design, instruction manuals and procedures typically describe how an artefact should be used, but not how we should plan or organise the use of it. Yet the realisation of the artefact may affect the latter as much – or even more – than the former.
As a definition, the aim of Cognitive Task Design is to focus on the consequences that artefacts have for how they are used, and how this use changes the way we think about them and work with them – on the individual as well as organisational level. The ambition is to ensure that Cognitive Task Design is an explicit part of the design activity, rather than something that is done fortuitously and in an unsystematic manner.
Cognitive Task Design is not new, since many of the principles have been recognised and used before. Some may be found among the roots of Cognitive Task Analysis, as described below. Two more recent examples are the concept of “design for quality-in-use” (Ehn & Löwgren, 1997) and the notion of task tailoring (Cook & Woods, 1996). It is also a postulate that this perspective is unified. Perhaps it would be more correct to say that CTD should become a unified perspective on design. The argument of this prolegomenon, and of many of the chapters that follow, is that the design of artefacts and systems very often has neglected the aspect of cognitive tasks in the above sense, i.e., as the way we think about artefacts rather than as the way we use them. A considerable amount of work has been done on issues of usability and usefulness, and several schools of thought have established themselves. Yet both usability and usefulness focus more on the direct use of artefacts than on how that use by itself changes how we come to see them.

The Need Of Cognitive Task Design
The 20th Century has witnessed dramatic changes to the nature of human work, particularly since the 1950s. These changes led to the emergence of human factors engineering, ergonomics and later developments such as cognitive ergonomics and cognitive systems engineering. The extent of the changes is amply demonstrated by tomes such as the Handbook of Human-Computer Interaction (Helander et al., 1997) and the Handbook of Human Factors and Ergonomics (Salvendy, 1997). In relation to CTD, the following two changes were particularly important.
Firstly, work went from being predominantly manual work – or work with the body – to being predominantly cognitive work – or work with the mind. Many manual tasks have disappeared while new cognitive tasks have emerged. For those manual tasks that remain, technology has often changed them considerably.
This change to the nature of human work is the logical continuation of the development that gained speed with the industrial revolution, the essence of which is that machines or technology are used to amplify and/or replace human functions. Modern information technology has significantly increased the speed by which this development takes place and the types of work that are affected. Even for the kinds of work that are still largely manual, technology or machinery are usually involved in some way. (A checkout counter at a supermarket is a good example of that.) Today there are, indeed, very few types of work that depend on human physical power and abilities alone. Machines and technology have effectively become part of everything we do whether at work or at home. This means that cognitive tasks are everywhere, and work design is therefore effectively cognitive task design.
Secondly, cognitive tasks – even loosely defined – are no longer the prerogative of humans, but can also be carried out by a growing number of technological artefacts. Machines and information technology devices have, in fact, for many years been capable of taking over not just manual but also mental work. In other words, the ability to amplify human functions has migrated from the physical (motor) to the cognitive parts of work. It is not just that work has become more cognitive, but also that humans have lost their monopoly of doing cognitive work or cognitive tasks. When we conceive of and build machines, we must therefore also in many cases consider cognitive task design.
The changes to the nature of human work need corresponding changes to the methods by which work is described, analysed and designed. The cognitive aspects of work have traditionally been addressed by cognitive task analysis, as an extension of classical task analysis. But cognitive tasks are more than just an addition to manual tasks, and the changes affect work as a whole rather than what humans do as part of work. In order to be able to build efficient and safe socio-technical systems, we must be concerned about cognitive task design from the point of view of the individual who carries out the work as well as of the work system. Cognitive task design thus comprise the study of cognitive work – by humans, by machines, and by human-machine ensembles – and covers the whole life-cycle of work from pre-analysis, specification, design, risk assessment, implementation, training, daily operation, fault finding, maintenance, and upgrading. Cognitive task design is about the nature of work as it is now and as we want it to be in the future.