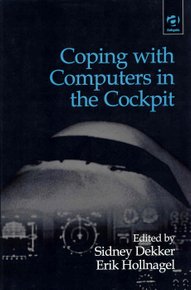 Another book on aviation automation ? Well, perhaps this is not a book on aviation automation per se. It is a book, rather, on how an entire industry is coping with aviation automation. Or more precisely, on how it is coping with the human consequences of automation that it has fielded over the last two decades. The aviation domain, and the cockpit in particular, has always been seen to be on the forefront of technological and human-machine interface developments. From one angle, progress in the cockpit has been enormous, compared, say, with the technological state of the typical enroute air traffic control  centre. But from another angle, such perceived progress has merely been the wrapping around a large number of unanticipated practical problems—problems that are now the inevitable by-product of the automation technology that aeroplanes have adopted. Practical problems masked as progress, in other words.
The aviation industry knows it. It is struggling to find ways to meaningfully educate and train operators for their completely different work in the automated environment. It is reconsidering who to select for these jobs and how. And now that current cockpit designs are firmly in place and its problems better-accounted for, it is regrouping to begin to regulate and certify cockpit equipment on the basis human factors  criteria. This while manufacturers are voicing continued concern over the lack of concrete and specific ideas for better feedback  design  in the next generation of flightdeck automation.
One result of being ahead of the pack is that you will encounter and, hopefully, solve a host of new problems and thereby generate an experience that can be helpful to others. It is therefore quite ironic that many other industries are in fact (re)-discovering similar automation  related problems for themselves as they stumble ahead on technology-driven paths. For example, ship bridges are being invaded by heavily moded automation technology: standardised design  does not appear to exist and formal operator training  is neither required nor well-organised. The result is that ships have begun to show the same pattern of human-machine breakdowns and automation surprise s that were discovered in aviation years ago (see for example the grounding of the Royal Majesty, NTSB 1996). Hence the dire need for this book: not only is it relevant to exchange experiences and swap lessons across one industry - aviation - it is also critical to show how one industry has to cope with the consequences of its own automation to industries that are poised to adopt similar systems in their operational environments.

Investing in human expertise  and automation  development
The book echoes two intertwined themes. The first theme explores how and where we should invest in human expertise  in order to cope with computers in the cockpit today and tomorrow. It examines how practitioners can deal with the current generation of automated systems, given that these are likely to stay in cockpits for decades to come. It examines how to prepare practitioners for their fundamentally new work of resource management, supervision, delegation and monitoring. You will find many reports from the front on this theme. For example, various chapters converge on what forms cockpit resource management training  could take in an era where flying has become virtually equated with cockpit resource management (managing both human and automated resources to carry out a flight). There are chapters that target more specific phases in a pilot’s training career, for instance the ab initio phase and the transition training  phase. Yet another chapter makes recommendations on how an air carrier can proceduralise the use of automation  in terms of how different levels of automation  affect crewmember duties, without getting bogged down in details that are too prescriptive or too fleet-specific.
The second theme explores what investments we must make in the development of automated systems. The industry would like to steer the development of additional cockpit equipment and air traffic management  systems in human-centred directions—but how? Current processes of development and manufacturing sometimes seem to fail to check for even the most basic human-computer interaction flaws in for example flight management system s coming off the line today. Two chapters examine whether and how certification  and increased regulation could help by setting up standards to certify new or additional cockpit equipment on the basis of human factors  criteria. Although these chapters represent current European state of the art in this respect, much work needs to be done and much more agreement needs to be reached, for example on whether to pursue quantitative measures of human error  and human performance in system assessment . Another chapter lays out how we could finally break away from the traditional but unhelpful, dichotomous notion of function allocation  in our debates about automation . As this automation is becoming more and more powerful, allocation of a priori decomposed functions misses the point. Also, such increasingly powerful automation needs to show feedback  about its behaviour, not just its state or currently active mode  - an issue targeted in a chapter on automation visualisation . Finally, one chapter looks into the problem of extracting empirical data about the future. As technology development goes ahead, in aviation and in many other fields of human endeavour, it becomes ever more important to be able to evaluate the human factors consequences of novel technological solutions before huge resources are committed and the point of no return has been reached. This chapter explains how to generate empirical data relating to human performance in systems that do not yet exist.

Real progress
As automation  has brought along many practical problems under the banner of continued progress, the aviation industry is struggling to cope with the human-machine legacy of two decades of largely technology-driven automation. The lessons learned so far and the lessons still to be learned, carry information not only for aviation, but for a number of industries that are opening their doors to similar problems. Real progress across multiple industries, not the kind that cloaks the sequential introduction of practical problems into different worlds of practice, can only be achieved through acknowledging the similarity in challenges that we have created for ourselves.