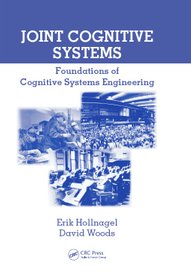 The focus of Cognitive Systems Engineering (CSE) how humans can cope with and master the complexity of processes and technological environments, initially in work contexts but increasingly also in every other aspect of daily life. The complexity of the current technological environment is not only something that must be mastered but paradoxically also provides the basis for the ability to do so. This entangling of goals and means is mirrored in the very concepts and theories by which we try to understand the situation of humans at work. To set the context, this chapter gives an overview of the scientific developments of the 20th century that have shaped our thinking about humans and machines.

Introduction
This book could reasonably start by asking how Cognitive Systems Engineering – in the following abbreviated to CSE – came about. Yet more relevant than accounting for the how is accounting for the why, by describing the forces that led to the formulation of the basic ideas of CSE. Such a description is important both to understand what CSE is all about, and as a justification for the CSE as it is today. Although CSE was formulated more than twenty years ago (Hollnagel & Woods, 1983), the basic message is certainly not outdated and its full potential has not yet been realised.
A description of the driving forces has the distinct advantage of being based on hindsight, which makes it possible to emphasise some lines of development that are useful to understand the current situation, without blatantly rewriting history as such. The three main driving forces are listed below. As the discussion will show, the situation at the beginning of the 21st century is in many ways similar to the situation at the end of the 1970s.

Computerisation itself was the outcome of a number of theoretical and technological developments that went further back in time. Some of these were helpful and provided the concepts, models and methods that made it possible to address the practical issues of the time – around the middle of the 20th century – while others were decidedly unhelpful, in the sense that they accidentally created many of the problems that practitioners had to struggle with. It is usually the case that the positive aspects of an innovation – be they technical or conceptual – attract attention and therefore often quickly are used in applications. In the initial enthusiasm the negative aspects are easily overlooked and therefore only become clear later – sometimes even much later. This may happen in a concrete or material sense such as with nuclear power or the general pollution caused by industrial production. It may also happen in an incorporeal sense such as when a certain way of thinking – a certain paradigm in the Kuhnian meaning of the term (Kuhn, 1970) – turns out to be a stumbling block for further development. As we shall argue throughout this book, the information processing paradigm represents such as case. The positive sides were immediately and eagerly seized upon, but the negative sides only became clear almost half a century later.